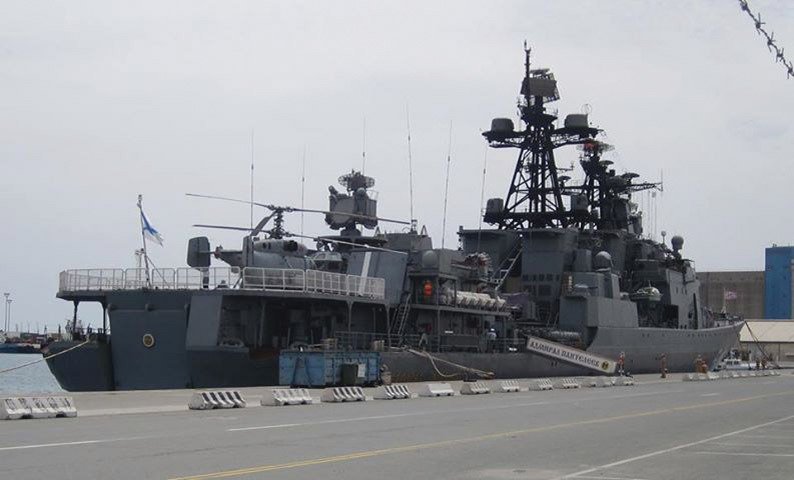 The US wants Cyprus to deny docking to Russian vessels

IN THE course of the week, the bipartisan Foreign Relations Committee of the American Senate adopted an amendment to the proposed legislative act that removes the embargo on the sale of arms to Cyprus.

On the basis that the American administration will compile, at least once in every year, a report to the Senate confirming that “the Government of Cyprus has taken and continues to take all the necessary measures for discontinuing the practice of allowing Russian military vessels to use Cypriot ports for the purposes of refueling and servicing”.

President Nicos Anastasiades reacted to this development by describing it as “unfortunate”.
Then, the government spokesman referred to “the long-standing practice of providing Russia with assistance, as being a ‘humanitarian act’”. I suspect that the US Senate would be very reluctant to consider the facilities offered to Russia under the agreement signed by Anastasiades and Vladimir Putin in 2015 as a form of humanitarian assistance.

What the government appears to be missing is the essence of the message transmitted by the United States. The message is loud and clear: “You have to choose between the West and Russia and you cannot have it both ways, as you have tried to do in the past”.

Whether Cypriots consider the dilemma posed as fair or not is totally irrelevant and any attempt to evade the issue is likely to prove fruitless. Nevertheless, the written statement issued by the Cyprus government suggests that the point has, in fact, been missed.

The statement issued simply reiterated the belief that “it is particularly important for the US to recognise the role of the Republic of Cyprus in a region of geostrategic importance, like that of the southeastern Mediterranean”.

A further point that needs to be made relates to the use of the word “unfortunate”, which suggests that the Cyprus government was taken by surprise. This prompts a further question: Was there a miscalculation on the part of the government or is the US administration unpredictable and unreliable? I have no basis for attempting to respond to the last question and I will not attempt to do so but it is a crucial question the answer to which is of critical importance in formulating the future tactics of the government.

Reverting to the dilemma posed by the US administration, namely the call on Cyprus to take a stand on the East-West conflict, which has flared up in the recent past, I would say that there is little room for doubt. Cyprus must side with the West.

In economic and political terms, Cyprus has always operated as a “western” type democracy. I suspect that few Cypriots would wish to adopt a system that has either been abandoned by all the European states that used to be part of the “eastern bloc” or is currently being transformed into something new the modus operandi of which is still unclear and uncertain.

Cyprus has rightly opted to become a full member-state of the European Union, which is gradually being transformed into a federation. Shifting towards the “eastern bloc” may be difficult but not inconceivable for a country like Turkey.

However, in the case of Cyprus, such a move would spell catastrophe because it would encourage the US and the West to offer Cyprus to Turkey as an inducement to stick to the West. Greece is unlikely to follow Cyprus in such a move, resulting in a kind of a “reverse-enosis”.

Contrary to the generally prevailing impression amongst Cypriots, Russia has never gone out of her way to support Cyprus. As Glafcos Clerides clearly states in his memoirs, Russia did not do it in 1974. Nor did she provide any real help in 2012 when Cyprus was confronted with the worst economic crisis in her history and the then minister of finance had installed himself in Moscow begging for assistance. Russia also failed to rally to the support of Cyprus in the recent past by confining her involvement to advocating a solution of the Cyprus problem that would be “just, viable and functional” and would be acceptable to both the Cypriot communities – a wording that can be interpreted in any way you wish to have it interpreted.

As one would expect, the actions taken by Russia were always aiming at serving her own interest of averting a solution of the Cyprus problem that would place Cyprus within the western politico-economic framework. By contrast, given the opportunity, Russia did not hesitate to embrace Turkey and to support the latter in a variety of ways.

The bottom line is that the game Cyprus has tried to play since independence – of being a balancing figure in international politics – has never worked and, indeed, it has led to the dreadful situation that we are currently finding ourselves in. The sooner we abandon such grandiose but unrealistic thoughts and confine our role in line with our size, the better. The worst option is what our leaders have been consistently doing with few exceptions. You only need to look at the history of Cyprus over the past 50 years to appreciate the validity of this conclusion.

Fire raging near the beach in Xylophagou