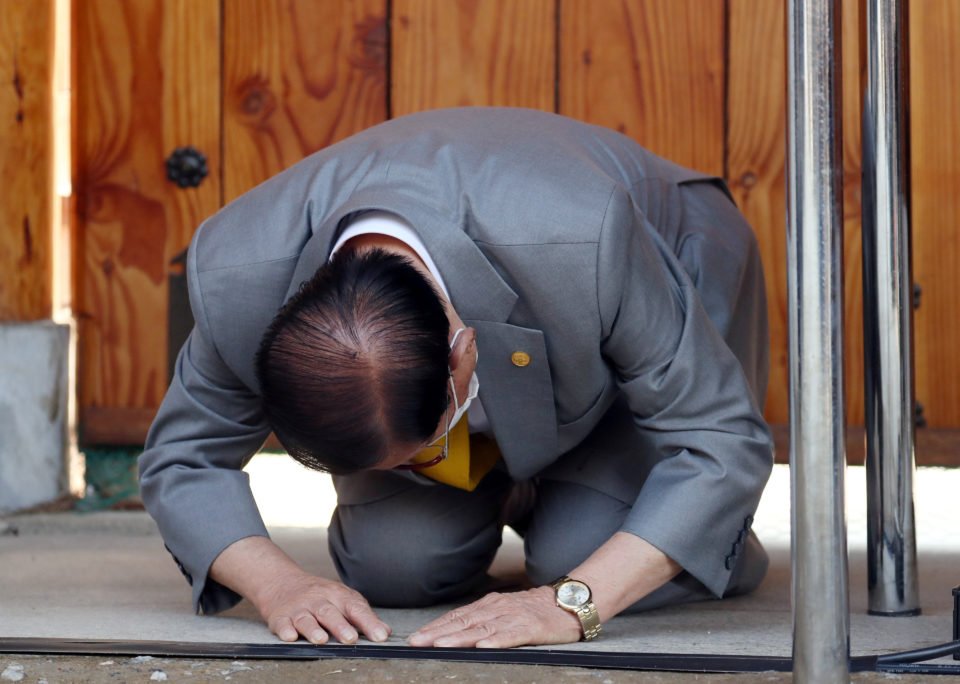 Lee Man-hee, founder of the Shincheonji Church of Jesus the Temple of the Tabernacle of the Testimony, does a deep bow during a news conference at its facility in Gapyeong

South Korea sought murder charges against leaders of a secretive church at the centre of a ballooning coronavirus outbreak in the country on Monday as the global death toll rose above 3,000.

World stock markets regained some calm as hopes for global interest rate cuts to soften the economic blow of the virus steadied nerves after last week’s worst plunge since the 2008 financial crisis.

There were 586 more on Sunday, broadening the largest virus outbreak outside China. There have been 26 deaths in total.

Worldwide, the death toll has risen to 3,044, according to Reuters figures.

Of the new cases in South Korea, 377 were from the south-eastern city of Daegu, home to a branch of the Shincheonji Church of Jesus, to which most of South Korea‘s cases have been traced.

The agency said that in January some members of the church visited the central Chinese city of Wuhan, where the disease emerged late last year.

The Seoul government asked prosecutors to launch a murder investigation into leaders of the church, a movement that reveres founder Lee Man-hee.

Seoul Mayor Park Won-soon said that if Lee and other heads of the church had cooperated, preventive measures could have saved the people who died.

“The situation is this serious and urgent, but where are the leaders of the Shincheonji, including Lee Man-hee, the chief director of this crisis?” Park said in a post on his Facebook page late on Sunday.

Seoul’s city government said it had filed a criminal complaint with the Seoul Central District Prosecutors’ Office, asking for an investigation of Lee and 12 others on charges of murder and disease control act violations.

Lee apologised on Monday that one of its members had infected many others, calling the epidemic a “great calamity”.

“We did our best but was not able to stop the spread of the virus,” Lee told reporters.

It was not immediately known how many of South Korea‘s dead were directly connected to the church.

Wuhan, the Chinese city at the centre of the epidemic, closed the first of 16 specially built hospitals, hurriedly put up to treat people with the virus, after it discharged its last recovered patients, state broadcaster CCTV said on Monday.

News of the closure coincided with a steep fall in new cases in Hubei province, but China remained on alert for people returning home with the virus from other countries.

“The rapid rising trend of virus cases in Wuhan has been controlled,” Mi Feng, a spokesman for China’s National Health Commission, told a briefing.

“Outbreaks in Hubei outside of Wuhan are curbed and provinces outside of Hubei are showing a positive trend.”

The virus broke out in Wuhan late last year and has since infected more than 86,500 people, the majority in China, with most in Hubei.

Outside China, it has in recent days spread rapidly, now to 53 countries, with more than 6,500 cases and more than 100 deaths. Italy has 1,694 cases, the vast majority in the wealthy northern regions of Lombardy, Veneto and Emilia Romagna.

Global factories took a beating in February from the outbreak, with activity in China shrinking at a record pace, surveys showed on Monday, raising the prospect of a coordinated policy response by central banks to prevent a global recession.

Middle East airlines have lost an estimated $100 million so far due to the outbreak and governments should help the carriers through this “difficult period”, an official of the International Air Transport Association (IATA) said.

Global airlines stand to lose $1.5 billion this year due to the virus, he said.

The Organisation for Economic Cooperation and Development warned that the outbreak was pitching the world economy into its worst downturn since the global financial crisis, urging governments and central banks to fight back.

Officials in US President Donald Trump’s administration on Sunday tried to calm market panic that the coronavirus could cause a global recession, saying the US public had over-reacted and that stocks would rebound due to the American economy’s underlying strength.

The S&P 500 index tumbled 11.5 per cent last week. Roughly $4 trillion has been wiped off the value of US stocks.

Speaking to NBC’s Meet the Press on Sunday, Vice President Mike Pence, who is leading the administration’s response to the virus, said the market “will come back”.

“The fundamentals of this economy are strong. We just saw some new numbers come out in housing and consumer confidence and business optimism. Unemployment is at a 50-year low. More Americans are working than ever before,” Pence said.