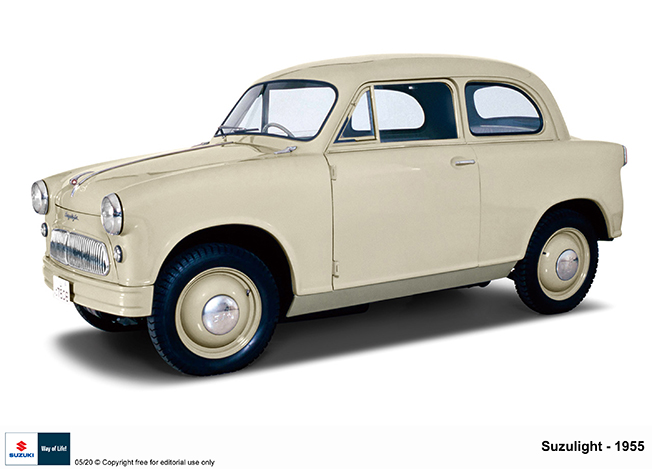 A 1955 Suzulight. Initial development of Suzuki’s first car began as far back as 1937 although this was later shelved with the outbreak of the second World War. Research and development finally resumed in 1954 when Suzuki Motor Co Limited was formed

2020 is Suzuki’s 100th anniversary, with Michio Suzuki having first started in business in March 1920 with the manufacture of textile looms.

These became more advanced and very popular right through to the early 1950’s when there was a global decline in the cotton industry.

Initial development of Suzuki’s first car began as far back as 1937 although this was later shelved with the outbreak of the second World War. Research and development finally resumed in 1954 when Suzuki Motor Co Limited was formed.

Michio researched vehicles produced overseas and gained a wealth of knowledge to build the first Suzuki car, known as the Suzulight.

Suzulight was a compact vehicle weighing just over 500kg and powered by a 360cc, 15PS two cylinder, two-stroke engine – the first of its type to be fitted to a car. It was also the first car in Japan to feature a front wheel drive/front engine layout.

As a prototype, during extensive road testing, it undertook a 300km trip across the Hakone mountainous region between Hamamatsu and Tokyo which proved challenging on roads that had not yet been paved. Upon arrival the team presented the car to the president of ‘Yanase Auto’ – Japan’s leading authority on automobiles.

The president took the car out to thoroughly test it, returning several hours later “very impressed” and immediately gave Suzuki full approval to put the Suzulight into production. It was way ahead of its time with independent coil spring suspension and rack and pinion steering.
Production commenced in October 1955, initially turning out 3-4 cars per month, but by early 1956 monthly volume had climbed to 30 units.

In 1959, the design changed with the development of the Suzulight TL model and their popularity quickly grew. The TL also adopted the front wheel drive/front engine layout and was acclaimed for its interior and the storage space within its very compact size.

The engine remained a two-stroke, air cooled 360cc unit but with an increase in power to 21PS at 5,500rpm.

Production expanded quickly: in December 1959, just three months after its launch it had already reached the monthly production goal of 200 units, which climbed sharply in 1960.

65 years on, Suzuki is still known for its small cars and now produces three million units per year. Michio Suzuki’s original strategy for the production of lightweight vehicles lives on with platforms introduced for Ignis and Swift. The latest Swift Sport Hybrid weighs in at just 1,025kg.

Mazda meanwhile began as a manufacturer of cork products, switching to machine tools in 1921. The new company president Jujiro Matsuda realised his company had the expertise to manufacture a product to meet the new demand for utilitarian three-wheeled trikes caused by Japan’s economic upturn.

Mazda’s very first vehicle was a three-wheeled open truck called the Mazda Go, which was the first motorised vehicle produced by the Toyo Kogyo company, as Mazda was then called. Unlike many of its rivals, it had a ground-breaking rear differential and a reverse gear.

Introduced in October 1931, the Mazda Go Type-DA was equipped with an in-house developed air-cooled one-cylinder 482cc engine producing 9.4ps and was named Mazda in deference to both Matsuda’s name and Ahura Mazda, the Persian god of light, wisdom, harmony and intelligence.

A sales success, this first version was followed by more powerful DB, DC and KC variants.
In 1936 Mazda set out on a cross-country promotional tour with five Mazda Go models.

Starting in Kagoshima near the southernmost tip of Japan’s main island chain, the expedition showcased the three-wheeler’s durability over 1,680 miles of dusty, muddy and backbone-rattling trails, arriving in Tokyo 25 days later. The publicity significantly boosted sales and raised the company’s profile, and it would not be the last time that Hiroshima’s automotive company would set out on a heroic drive to promote its products.

Thirty years later the now well-established Toyo Kogyo company chose one of the toughest motorsport events to promote its new sports car. Launched in 1967, the Mazda Cosmo 110S was the world’s first production car with a twin-rotor rotary engine. Named after the late sixties’ fascination with the space race, this sleek sports coupe would spearhead an endurance driving endeavour to promote Mazda cars in the crucial European export market.

The Marathon De Le Route was created to replace the legendary Leige-Rome-Leige Alpine rally when racing on public roads in Europe become more difficult. To test the endurance and reliability of the rotary engine, Mazda entered two Cosmos in the gruelling 1968 Marathon de la Route – an 84-hour race around the 28km Nurburgring.

While one car crashed out of the race, the surviving Cosmo finished fourth, beaten only by a pair of Porsche 911s and a Lancia Fulvia – considered at the time to be two of the finest sports cars in Europe.

As the company grew its global presence through the sixties and seventies it wasn’t just on the racetrack that it put its newest products through the toughest of public tests. In 1977, to promote the first-generation Mazda 323, a pair of 323 hatchbacks made the 9,320-mile journey from Hiroshima to their European premiere at the Frankfurt Motor Show.

At the height of the Cold War, the two 323s drove through the Soviet Union, and despite the poor roads and tough conditions on the route they suffered no breakdowns – an achievement that confirmed the vehicle’s reliability before it went on sale.

That famous 1977 expedition was echoed in 1990, when six Mazda vehicles (626s, 323s and E2200 vans) drove from Hiroshima to Mazda’s German headquarters in Leverkusen, this time through the dissolving Soviet Union. Then, in 2013, this time with journalists driving the cars, several third-generation Mazda3s repeated the Japan to Germany trip, from the factory to the Frankfurt Motor Show, driving through Russia, Belarus and Poland.

Inspired by these challenging drives and public vehicle tests of the brand’s past, today Mazda Epic Drive media events allow journalists to experience challenging roads, amazing scenery and unique adventure from behind the wheel of a Mazda.

Facing extremes such as driving an MX-5 to the most-northerly point in Europe in the depths of winter in temperatures as low as -30 degrees, or in the forthcoming 2020 Kazakhstan Epic Drive, Mazda says its “love of using a drive to challenge man and machine is as strong today as it was in 1936 when a group of pioneers set out to demonstrate the durability of the Mazda Go”.

Our View: Better to delay phase 2 of Gesy than see system collapse