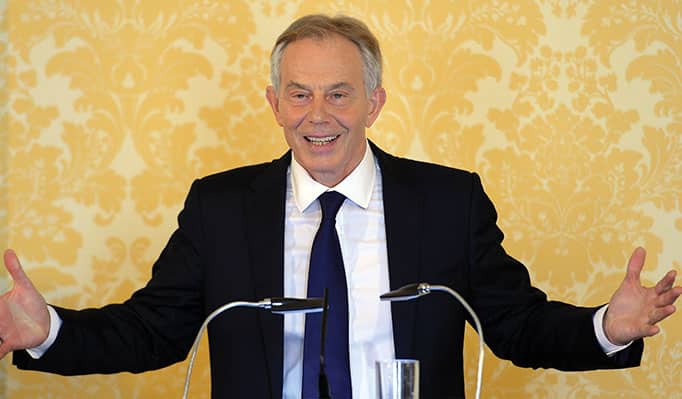 Former British prime minister Tony Blair speaks during a press conference in response to the Chilcot Iraqi Inquiry, at the Admiralty House, London, Britain, 06 July 2016. Tony Blair said: 'I express more sorrow, regret and apology than you may ever know or can believe'. Mr Blair said that the report contained 'serious criticisms' but showed that 'there were no lies, Parliament and the Cabinet were not misled, there was no secret commitment to war, intelligence was not falsified and the decision was made in good faith'. The Chilcot Inquiry, chaired by Sir John Chilcot, examines the circumstances surrounding the British Governments involvement in the 2003 Iraq War. EPA/STEFAN ROUSSEAU / POOL UK AND IRELAND OUT

“If you tell a lie big enough and keep repeating it, people will eventually come to believe it. The lie can be maintained only for such time as the State can shield the people from the political, economic and military consequences of the lie. It thus becomes vitally important for the State to use all its powers to repress dissent, and thus by extension, the truth is the greatest enemy of the State.”

So said the person acknowledged by many to be the architect of public relations as practised in the modern era: Joseph Goebbels, Propaganda Minister of the Third Reich and leading member of Hitler’s inner circle. Those who care to immerse themselves in his diaries will find a heady mix of elation, depression, his view of world events, gushing praise for his Fuhrer as well as detailed accounts of his day to day responsibilities and actions. His modus operandi is nowadays more commonly described as ‘spin’ with practitioners plying this trade at the heart of the administrations of present day world leaders. These characters are officially called press secretaries or communications directors but we refer to them as spin doctors or spinmeisters. Those of us with long memories can remember only too well gurus such as Margaret Thatcher’s Bernard Ingham and Tony Blair’s Alastair Campbell, both of whom were often seen hovering uneasily in the background whenever their masters were giving speeches, sometimes taking questions afterwards from the press corps and reinterpreting, or ‘spinning’, what was said or meant. These characters are like guardian angels whose sole purpose is to deflect, protect and portray the ‘truth’ from the perspective of the government of the day.

The use of the ‘big lie’ was never more apparent than during the build up to the invasion of Iraq in 2003, with George Bush, Tony Blair and their armies of ministers and secretaries of state lining up to convince the world that Saddam Hussein’s removal from power (euphemistically called ‘regime change’) was a just cause and that they had irrefutable evidence that he possessed weapons of mass destruction (WMDs). We were advised with an almost messianic conviction by Blair that the despot of Baghdad could activate his arsenal of WMDs in 45 minutes and that drone footage and dossiers existed which confirmed production facilities. Similar assertions were rolled out in America with members of the administration equally vociferous in ramming the ‘big lie’ down our throats. As it turned out, WMDs were never found, thus confirming in most people’s minds that their leaders knew only too well that what they were pumping out to their citizens was at best blatant manipulation of the truth or at worst barefaced lies.

Qualification under the WMD umbrella apparently encompasses chemical, nuclear, biological or radiological properties capable of killing large numbers of people or else damaging buildings, natural structures or the atmosphere. To most of us, Tomahawk Cruise missiles, smart bombs, Exocets, rapid-firing helicopter gunships and other sophisticated weaponry can also ‘massively destruct’ as well as mete out death with equal proficiency. Doubtless international lawyers have mapped out what’s acceptable in the noble ‘art’ of waging war and for them it’s more a case of semantics as to how they’re categorized. Be that as it may, isn’t the dropping of napalm canisters and the spraying of Agent Orange to defoliate the jungle (both of which come into the WMD bracket) in Vietnam, Cambodia and Laos by the Americans in the 1960s and 1970s, with accompanying casualties among non-combatants, as equally unacceptable and no different to Saddam Hussein’s employment of mustard gas against Kurdish civilians in Halabja in 1988?

In the context of Cyprus, its recent history has been littered with an abundance of truths, half-truths, omissions of the truth, interpretations of the truth, lies, damned lies and plenty of statistics. And there seems to be no let-up to their manufacture. Let’s first consider the events of the summer of 1974. President Makarios’ address to the United Nations in New York on 19th. July referred to the events four days earlier to topple his government as a Greek ‘invasion’. It’s more commonly referred to as a ‘coup’. The Greek Cypriots (GCs) call the Turkish army’s arrival on 20th. July due west of Kyrenia an ‘invasion’ (one would be hard pushed to call it otherwise) which culminated in their ethnic cleansing from the northern third of the island, the deaths of thousands and the disappearance without trace of many others. The Turkish Cypriots (TCs) refer to that day as a necessary ‘peace operation’ which guaranteed their safety and pre-empted the annexation of the island to Greece.

In December 1963 Makarios effectively tore up the London and Zurich Agreements signed three years previously by proposing his 13 points which would have changed the Constitution of the Republic. This sparked intercommunal fighting between the GCs and TCs and created division which has metamorphosed into de facto partition. The GCs say that the TCs withdrew from government, the latter claiming that they were pushed out. The truth probably lies somewhere in-between.

Commonly expressed examples of truth manipulation and omission can be read in the forum of this newspaper whenever articles concerning the Cyprus problem are published, with each side hurling abuse at the other accompanied by accusations of murderous behaviour, with very few ever admitting that their own are equally guilty of the most appalling crimes and invariably against defenceless civilians.  To this day, GCs and TCs regularly condemn one another for blowing up in the 1960s their own monuments, such as memorials to EOKA fighters and mosques, in deliberate agent provocateur acts in order to make the other look guilty of violence, with each never admitting that they perpetrated the selfsame antics. In the current peace process, one of the hackneyed adjectives repeatedly used is ‘intransigence’, with everyone claiming that it’s the other side that’s using delaying tactics and putting obstacles in the way of a successful resolution of the national issue. Yet again, the truth is somewhere in the middle. With the recent breakdown of the conference in Switzerland, each side has been ultra quick off the mark to blame the other. Plus ca change, plus c’est la meme chose.

The bottom line is that before, during and after wars or attempts at conflict resolution, the first casualty is indeed the truth with everyone automatically pumping out a heady mix of information in order to reaffirm the conviction to their respective populations that God is on their side and that all is well. Can we ever forget Saddam Hussein’s information minister, dubbed Comical Ali, announcing to the world that the Iraqi army were victorious on all fronts when on the television monitor behind him coalition troops were entering the outskirts of Baghdad? Truth flying in the face of reality and spin par excellence. Goebbels would have been proud of him.

One year after failed coup, Turkey lurches toward dictatorship

Breaking the stalemate? Five steps to make this possible