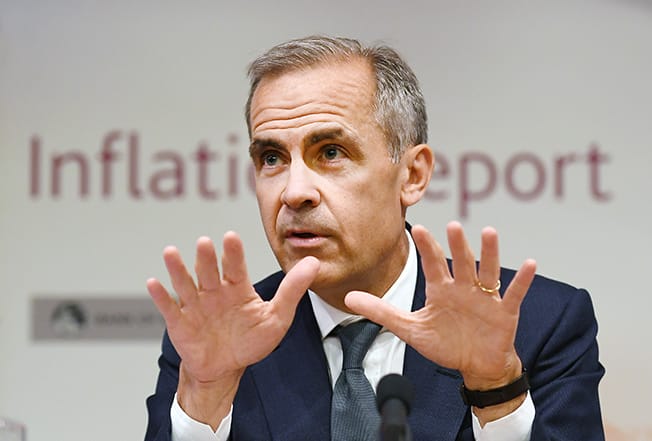 The Bank of England said it was likely to raise interest rates in coming months if the economy and price pressures kept growing, flagging Britain’s first rate hike in a decade.

Policymakers voted 7-2 on Thursday to keep rates on hold for now at a record-low 0.25 percent, as expected.

But in a week when data showed UK prices rising faster and unemployment falling to a four-decade low, they said their tolerance for above-target inflation was lessening.

The Brexit vote has put the BoE in a dilemma as it sought to balance the need to support the economy through the shock of leaving the European Union in March 2019 while also keeping a grip on fast-rising inflation.

It said that, if the trend towards shrinking spare capacity and rising underlying inflation continued, “some withdrawal of monetary stimulus was likely to be appropriate over the coming months.”

Sterling leapt by a cent against the dollar after the statement and 10-year gilt yields increased by 4 basis points to 1.18 per cent, their highest level since the BoE’s last meeting on Aug. 3.

“I would describe (a rate hike in) November as being live,” Nomura economist George Buckley said.
But weaker than expected inflation or disappointing growth in jobs or wages could still throw the BoE off course, he added.

The BoE and its Governor Mark Carney have previously signalled the probability of rate hikes ahead, only to be caught out by unexpected changes in the economy.

On Thursday it said the economy was doing a little better than it had expected last month, and that inflation was likely to rise further above its 2 per cent target to exceed 3 per cent in October – slightly more than previous forecasts – after reaching 2.9 per cent last month.

But it said it was “unclear how sustained any increase in GDP growth might be over the medium term”, citing unknowns about how households and businesses would react to the Brexit process.

The BoE repeated a previous message that all nine MPC members thought rates could rise faster than financial markets expected but any increases would be gradual and limited.

Economists polled by Reuters had mostly expected a 7-2 vote in favour of keeping the extra stimulus brought in in August 2016 when the economy appeared to be reeling from the shock of the Brexit vote.

But a minority had seen a chance that BoE chief economist Andy Haldane would join Ian McCafferty and Michael Saunders in backing an immediate increase in rates to 0.5 pe rcent.

Haldane – previously viewed as a dove – said in June that he expected to support a rate rise later in 2017.
After performing better than the BoE expected in 2016, Britain’s economy slowed in the first half of 2017 as the highest inflation in four years squeezes consumer demand.

The central bank is concerned that Britain’s ability to grow strongly over the medium term without generating excessive inflation has weakened.

It says the immediate surge in inflation above its target is due to the fall in the pound after the Brexit vote.

Sterling fell to a nine-month low on a trade-weighted basis on Aug. 29, though it has since recouped these losses and is little changed from its level at the time of the BoE’s last rate decision on Aug. 3.

This strengthening partly reflects growing market expectations of a rate rise. Short sterling interest rate futures price in a 44 per cent chance of a move by the end of this year.

The pattern over recent years has been for such expectations to fade rapidly, however, and most economists polled by Reuters at the end of August did not expect a rate rise until 2019.

The BoE said that wage growth of 2.1 per cent in the three months to July was stronger than it had expected, although it was still unclear if there would be the sustained pick-up it is forecasting. Unemployment at a 40-year low of 4.3 per cent is also a more positive development than the BoE had expected.

There is no news conference following this month’s policy decision. Carney is due to speak at the International Monetary Fund in Washington on Monday.