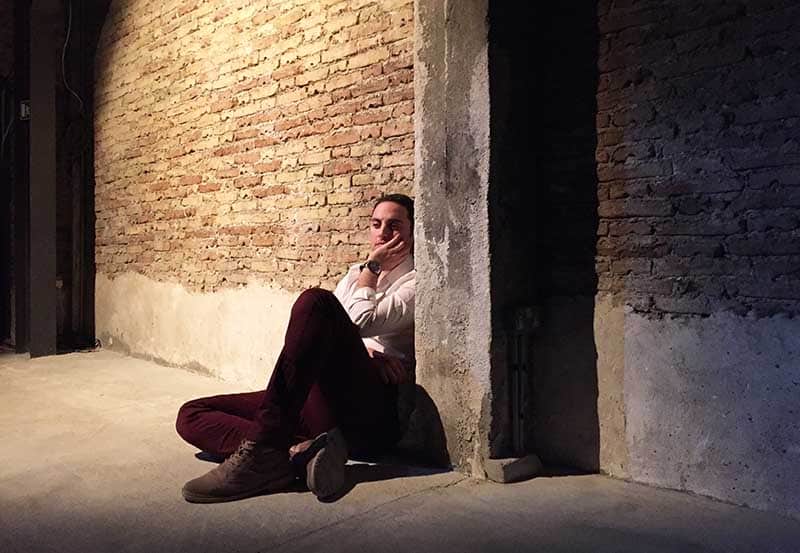 Monodrama is term that’s pretty self-explanatory. Requiring the opposite of the cast of hundreds needed in West End musicals and opera, this is a performance in which one, lone actor takes to the stage. And while it’s a genre that may lack the whizz bang wow of larger productions, it’s nevertheless a worthy theatrical undertaking: a challenge for actors, directors and crew, and a delight for audiences. So popular has the genre become that a number of dedicated festivals have sprung up in recent years. The largest solo theatre festival in the world, New York’s United Solo takes place annually, while Kiel, Germany, will be hosting the Thespis International Monodrama Festival this November. And now, under the auspices of Pafos2017, we have our very own iteration: the International Monodrama Festival of Cyprus.

The brainchild of legendary director, theatrologist and Festival Artistic Director Minas Tingilis, the event is a first for the island. “In 2015, we did launch an experimental monodrama showcase with five performances, and the following year, we held a nine-performance national monodrama festival, featuring local plays,” Minas reveals. “But this year, working under the auspices of Pafos2017, we’re able to host the first festival of international reach…”

A total of 14 plays will see performers from as far afield as Lithuania, Spain and Poland take to the stage in an event series which “aspires to place Cyprus on the international monodrama calendar, while establishing synergies and promoting artistic creation, both within Cyprus and abroad,” according to organisers. Running from October 23 to 29 at the Attikon in Paphos, the festival opens with a performance of Karagiozis, based on Lena Kitsopoulou’s short story (Big Streets, 2010), and dramatised by Herodotos Miltiadous and Andreas Araouzos. A particularly insightful look at childhood, the performance distinguished itself in last year’s national monodrama event and thus, according to Minas, guaranteed its inclusion in the international festival. “It’s a super performance, with Herodotos – acting the part of the protagonist – directed by Andreas,” he discloses. “And, like the other performances in the festival, it’s based on our literary theme…”

This, Minas explains, was a commercial decision: “As the Artistic Director of the festival, I chose performances which are, in the main, related to or based on literature – so there is a story there for audiences to follow.” As an expert in all things theatre, and a long-time visitor to the oft avant-garde Thespis Monodrama Festival in Germany, Minas deliberately chose not to include “very postmodern or physical theatre, things that usually feature in foreign festivals but with which the audiences here are perhaps not as familiar. Instead, we’ve gone for plays based on books people know and have read, in the hope that local audiences will be encouraged to attend.”

Unlike the Athenian Greeks of Minas’ hometown, the Cypriots “generally don’t like to go to the theatre as much,” he laments. “It’s not so much a part of the culture here. But, in contrast, we do see a lot of expats – especially the British and the Russians – interested in drama. Granted,” he adds, “the fact that a number of the performances are in a foreign language such as Arabic, or are presented as physical theatre, may make viewing more of a challenge, but hopefully people will see the value in what we’re doing and this can become a bi-annual event.”

On the nights in question, surtitles will ease audience comprehension, with simultaneous Greek and English translation where needed. But a number of performances require no words at all: Kiosk, a monodrama from the Arica Performance Company of Japan is pure physical theatre (ie silent) and is, in Minas’ estimation, an incredible performance. Focusing on a protagonist who works in a tiny kiosk, the monodrama brings “the complexity of the human body’s relation to physical labour to life through fierce physical repetition and live electronic music”. Both Rebecca (a local performance, which sees actress Charalambia Theophanous take on the role of the protagonist from Gabriel García Márquez’s One Hundred Years of Solitude in “a performance which uses language not as a narrative medium, but as a soundscape that poetically carries the atmosphere into the space”), and Mysterious Gift (an Iranian offering from actor Yaser Khaseb which, part dance and part performance art, invites the audience to contemplate the universality of the human experience) are of the same genre: exploring their themes without words.

On the flip side, performances such as Playing Maggie, the Iron Lady, by renowned British monodramatist Pip Utton – famous for his impressive personifications of Adolf Hitler, Winston Churchill, and Casanova – will boast more than a few words; as Margaret Thatcher, Pip will not only be introducing the audience to the former prime minster’s philosophy, inspiration and logic, but will also be giving viewers the opportunity to challenge the character through questions put forward.

“All in all, we’re looking at a festival which has been missing from the local theatrical scene, I feel,” Minas concludes. “As a Greek by birth, who arrived in Cyprus in 1999 for a one-year stay but is still on the island almost two decades later, I wanted to leave a lasting legacy of this kind; Pafos2017 is the ideal platform for this. Despite the lack of venues,” he adds, referencing the construction of a purpose-built theatre in the region for future events, “Paphos is the right place for this festival. The Pafos2017 committee wholly embraced the proposal, and I’m looking forward to introducing more people – both local and foreign – to a whole new world of drama… Monodrama!”

The International Festival of Monodrama
At Attikon, Paphos, from October 23 to 29. For more information and bookings, call 26 93 2017, or visit www.pafos2017.eu

Tiger cleared by doctors to return to golf: ESPN