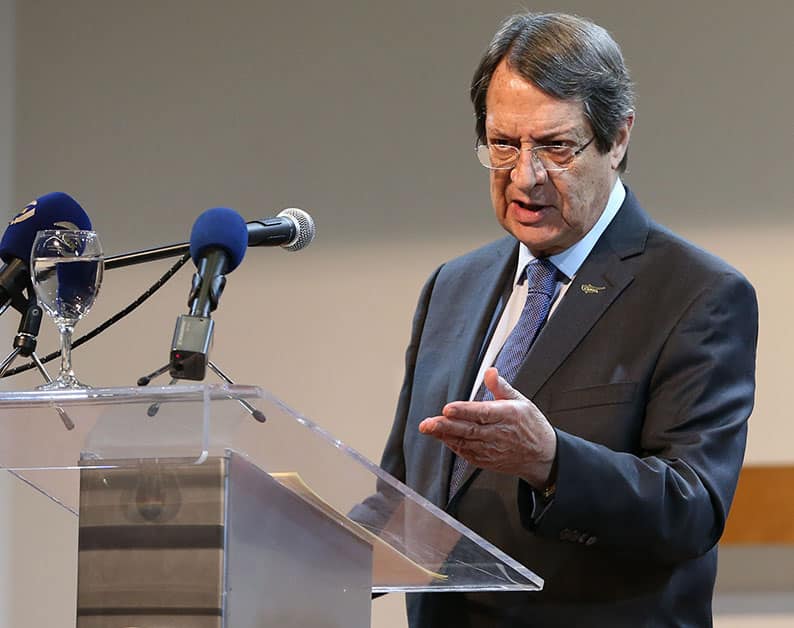 President Nicos Anastasiades on Wednesday responded to Mustafa Akinci’s call to accept the Guterres framework, saying the Turkish Cypriot leader, and more importantly Turkey needed to first clarify whether they accepted the parameters laid down on security, guarantees and troops.

Akinci on Monday had called on Anastasiades to accept as a “strategic package” without any alterations to the framework drawn up by UN Secretary-General Antonio Guterres in Crans-Montana, Switzerland, just days before the negotiations collapsed last July.

But on Wednesday the Turkish Cypriot leader’s overture soon became bogged down in which version of the proposals put forward in Switzerland last year the two sides were willing to discuss.

The Greek Cypriot side has been saying since the talks failed that they wanted the framework laid down by UN Secretary-General Antonio Guterres to be the basis for the resumption of negotiations.

Many saw Akinci’s move as a last-ditch overture to Anastasiades as voices have been growing stronger in the north and in Turkey to put a two-state solution on the table. The Turkish foreign minister spoke only last week of a new roadmap outside of UN parameters.

In a written statement following a cabinet meeting on Wednesday, Anastasiades said if the Turkish side was now accepting the Guterres framework, it was “a positive development”.

The framework talks about a new security mechanism instead of the existing one that involves guarantorship by Greece, Turkey and the UK, says the unilateral right of intervention by the guarantors should be abolished, and that they should not be the ones to apply and monitor the implementation of their own obligations.

It also talks of troop withdrawal with a drastic reduction from day one of a solution, followed by a return to the 1960 level and later for full withdrawal of remaining troops, which should be discussed with the participation of the prime ministers of the three guarantors.

“I make reference to a positive development because it is well known that the reason the talks in Crans-Montana failed were the very opposite positions of Turkey and the Turkish Cypriots to the contents of the framework,” said Anastasiades

“If, in spite of statements following the collapse of the talks in Crans-Montana they [Turkey and the Turkish Cypriots] do not insist on the positions they put forward at the Conference on Cyprus in July 2017, then the conditions for the immediate resumption of the dialogue are created, as I have repeatedly requested,” Anastasiades said.

Anastasiades said the Greek Cypriot side in Crans-Montana had submitted on July 5 and 6, under the framework, comprehensive proposals for each of the provisions that covered all six points laid out by Guterres, which Turkey and the Turkish Cypriot side failed to do.

“Therefore, both Turkey and Mr Akinci are invited to clearly clarify their positions, whether they accept or not the secretary-general’s parameters in order to avoid misinterpretations or sensationalist statements,” Anastasiades said.

The president did not address the parts of the Guterres framework that concern the Turkish Cypriot side such as the rotating presidency and power-sharing.

But Akinci said on Wednesday that the Guterres framework as it was presented on June 30 did not concern just security and guarantees but also political equality, land and property.

He added that the secretary-general had put the framework together thinking it could be used as a way out and that it was not up for negotiation. If these principles are accepted by the Greek Cypriot side, he said, “I am ready to accept it”.

Akinci said that the rotating presidency is clearly stated in the Guterres document, adding that there is also a reference to effective participation in decision-making.

He also said that Guterres had said at the time there should be some additional arrangements to address the concerns of the Greek Cypriots.

Akinci also said the framework states that unilateral intervention is unsustainable and that it provides for a mutually acceptable mechanism after a transitional period but that it did not say anything would be terminated from day one.

As for the withdrawal of troops, he said, the framework provides that any discussion should be at the highest level.

But later on Wednesday, government spokesman Prodromos Prodromou said that Akinci was in fact asking for the adoption of an “informal document of parameters presented by the then (UNSG) Special Adviser, Mr (Espen Barth) Eide on June 30, and which was indisputably contested by all sides as not responding to what the UNSG had proposed on June 28”.

It was because of this, Prodromou said, that the secretary-general had to come back on July 4 to restore the provisions of the parameters on which the Greek Cypriot proposals had been submitted.

The statement was in response to main opposition Akel which was first to jump on the possibilities being opened up by Akinci’s overture.

“Mr Anastasiades should make creative use of this proposal,” the party said, adding that under the UN chief’s framework the Treaty of Guarantee and intervention rights would be abolished. The party also made it clear that Guterres did not mean for his framework document to be an agreement in itself but to be used as a basis for negotiations.

Prodromou hit back at Akel, asking them to state whether, following the latest statements of the Turkish Cypriot leader “if it adopts Mr Akinci’s claims on a ‘strategic agreement’ which will not include provisions for the abolition of guarantees and for the withdrawal of the occupation troops,” over the July 4 document “which is the exact listing of parameters of the (UN)Secretary General”.

Hard-line Diko said the only reason the Turkish side was now willing to accept the framework now was because it served Turkish objectives and through Akinci, Ankara was seeking formal acceptance of it from the Greek Cypriot side.

The party called it a “dangerous retreat” by Anastasiades. It meant the rotating presidency and power sharing provisions, and “an unspecified” territorial adjustment concerning Morphou.
“It is proposed the guarantees be continued in a different form, and that only the unilateral right of the guarantee is characterised as unsustainable,” Diko said.

“There is no reference to the Turkish army’s final departure and the matter is referred to the prime ministers of the three guarantor powers,” it added.

Meanwhile, bicommunal groups, NGOs and unions welcomed Akinci’s proposal and called on both leaders to return to the table.

EU to act against countries flouting values, rule of law

Property transactions up 29% in April