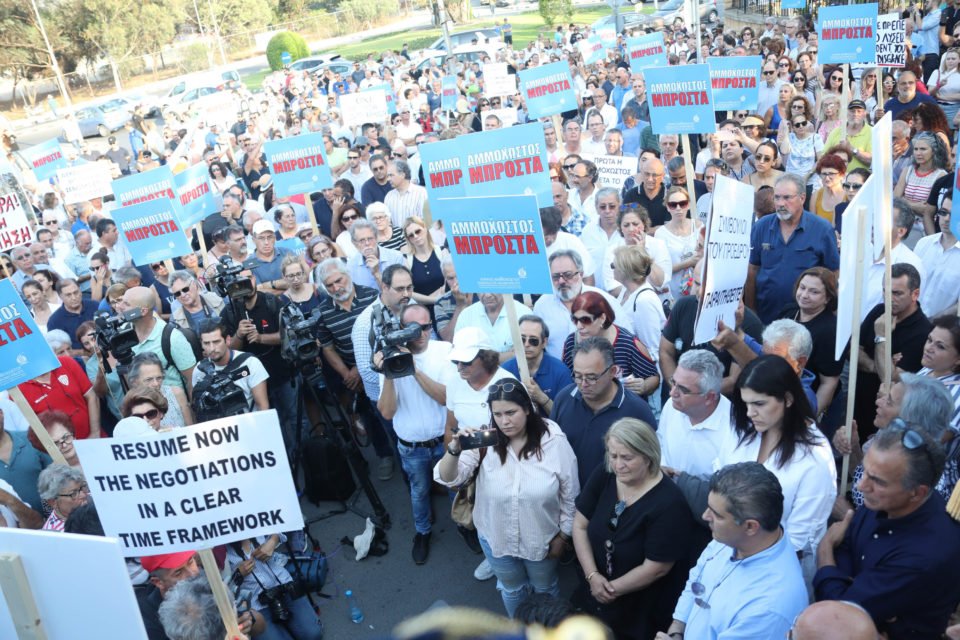 Scuffles broke out at a protest over Varosha held on Friday evening outside the presidential palace between members of Elam and protesters who said the far-right party has no place at a pro-reunification demonstration.

The arrival of Elam caused a commotion with tensions beginning to rise after some of them removed a banner that was previously positioned by protesters, and they replaced it with one replete with Greek flags depicting Cyprus in the centre.

The Elam members were asked by protesters to leave as the demonstration was one in favour of the reunification of Cyprus. This incited a violent reaction from Elam members and some scuffles broke out.

The Elam members finally moved away from the protesters to stand on an opposite road while protesters continued to jeer at them and chant “Eoka B murderers”.

Hundreds of people had responded to the call by Famagusta Mayor Alexis Galanos to protest the recent developments regarding Varosha.

Six buses were arranged to transfer groups of people from various parts of the island. Among the attendees were also a number of MPs, state officials, and former state officials.

Banners were hoisted with slogans such as ‘Save Famagusta’, ‘Freedom to Cyprus’, ‘Reunification the only solution’, and ‘Return to the negotiations table’, while flags were waved the word ‘Peace’ in both Greek and Turkish.

During the protest, President Nicos Anastasiades met with Galanos, who emphasised the need for a federal solution, urged Anastasiades to deal immediately with the “issue of colonialism” by Turkey.

Galanos added that the people gathered outside the presidential palace “are people who have been mourning for 45 years, people who want to go home and who want the president to exhaust every possible effort for a peaceful solution.”

But the same people, Galanos said, must be truly convinced that a solution is being sought and that the Greek Cypriots will never accept a two-state solution.

“Only one Cyprus exists, Mr President, just one, one and federal,” Galanos told Anastasiades.

Galanos added that “the issue of natural gas was a future matter, which hopefully in 10-15 years would be a blessing and not a curse, but the issue of the colonisation of Cyprus by Turkey was an immediate matter that should be addressed.”

Anastasiades responded that he would continue to do whatever was humanly possible to secure both a solution and the return of Varosha.

He asked Galanos to pass on to the protesters his whole-hearted support and compassion for their feelings, and added that his government had taken a number of initiatives in view of returning Famagusta to its lawful inhabitants, as have previous governments.

“The issue is not the Greek Cypriot side, but Turkish intransigence,” Anastasiades said, adding that the behaviour of the Turkish Cypriot side was not going unnoticed either.

The decision to stage Friday’s demonstration was taken last week during an extraordinary meeting of the Famagusta municipal council.

The council decided to draw up a memorandum to highlight the need for Famagusta to return to the forefront of discussions of the UN Security Council, which it said must implement the relevant resolutions.

UNSC resolution 550 (1984) ‘considers attempts to settle any part of Varosha by people other than its inhabitants as inadmissible and calls for the transfer of this area to the administration of the United Nations’.

After the demonstration, the memorandum was also to be handed to the embassies of the five special members of the Security Council, and also addressed to UN envoy Jane Holl Lute, the European Union House in Cyprus, as well as to parliamentary parties.

Last week, Galanos said that Varosha should become a top priority for the government because “if we lose Varosha, we lose the last step to a solution.”

The government on Friday confirmed that Anastasiades had sent a letter concerning the latest developments on Varosha to the UN Secretary-General this week.

Foreign Minister Nicos Christodoulides and Government Spokesman Prodromos Prodromou confirmed it concerned the announcement by the Turkish Cypriot side on an inventory on the properties in the closed-off town of Varosha and talk that it would open under Turkish Cypriot administration.

Prodromou said Anastasiades reiterated his proposal, which he had also submitted in writing to Turkish Cypriot leader Mustafa Akinci for setting up a bicommunal technical committee for the redevelopment and resettlement of Varosha and seek EU funding for the committee’s operations and technical support by the UN to secure the demilitarisation of the town.

Reports on Friday said Anastasiades was to brief political leaders on the latest developments on the Famagusta issue and the EEZ during separate meetings with each of them.