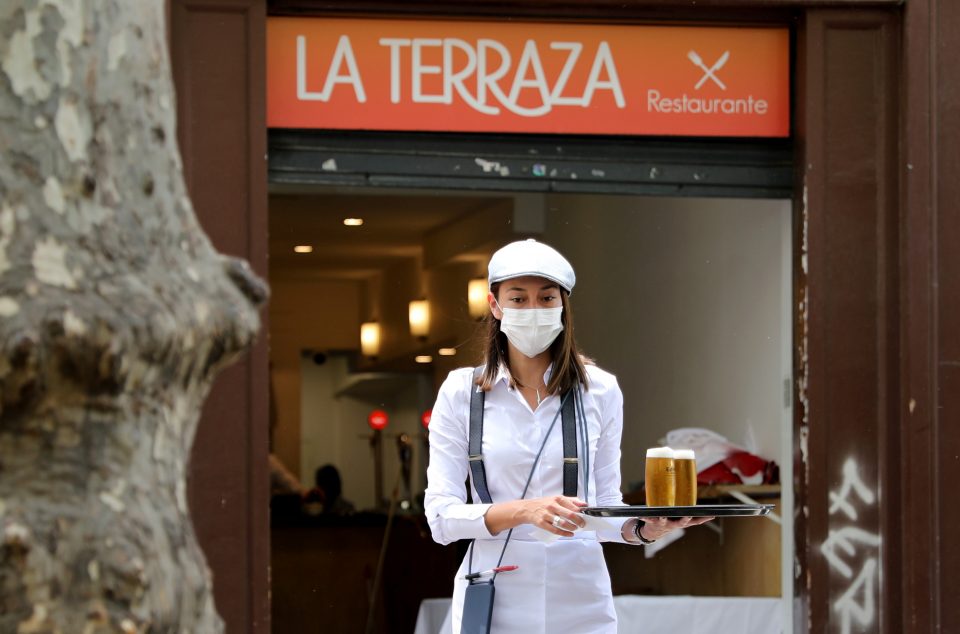 A waitress wearing a protective face mask carries beverages for clients at an outdoor seating section of a restaurant at Ramblas, in Barcelona

Armed with mass testing and tracing capabilities, a growing number of European countries are expressing confidence that they can avoid a return to economically-devastating coronavirus lockdowns.

While most European countries failed to contain the coronavirus outbreak when it reached them in February and March, Belgium and Poland are among those who say they are far better placed to deal with any so-called second wave.

After nearly two months of clampdowns, pupils are returning to school and non-food shops or restaurants are re-opening, albeit with warnings that this easing could be stopped or even reversed if coronavirus cases start to spike.

“We can rule out that we will have to go back to the tough measures,” Belgian Interior Minister Pieter De Crem told broadcaster VTM on Sunday.

This was echoed by Polish Health Minister Lukasz Szumowski who told weekly newspaper Sieci that Warsaw was well equipped, after successfully halting the spread of an outbreak in Silesia.

“One can’t do a second lockdown … We have infrastructure, over 120 laboratories perform tests. There are tools to control this monster,” Szumowski said.

In the Czech Republic, which has had fewer than 9,000 cases, the government expects more targeted than blanket measures, while Serbia sees the possibility of local spikes, but says that reimposing a lockdown is unlikely.

Although countries that have lifted lockdowns have experienced local spikes, such views appear to be backed by the World Health Organisation (WHO), which has said countries such as Germany, with strong public health measures in place, should be able to suppress clusters of cases.

“We need people to stay with us, to really understand that this is going to take some time to work through. We may not get this right exactly the first time,” WHO epidemiologist Maria Van Kerkhove told an online news briefing on May 11.

Germany has seen its number of new coronavirus cases continue to fall since easing restrictions in early May, although there have been outbreaks at meat processing plants, old people’s homes and at a religious service in Frankfurt in which more than 100 people were infected.

For some European states, including those hit hardest by the pandemic, there is greater caution over lifting restrictions.

Jean Castex, the official in charge of France’s exit plan told lawmakers in early May such a plan had to incorporate a readiness to ‘re-confine’ if necessary.

And Romanian President Klaus Iohannis said he would not hesitate to reimpose a full lockdown if infections soared.