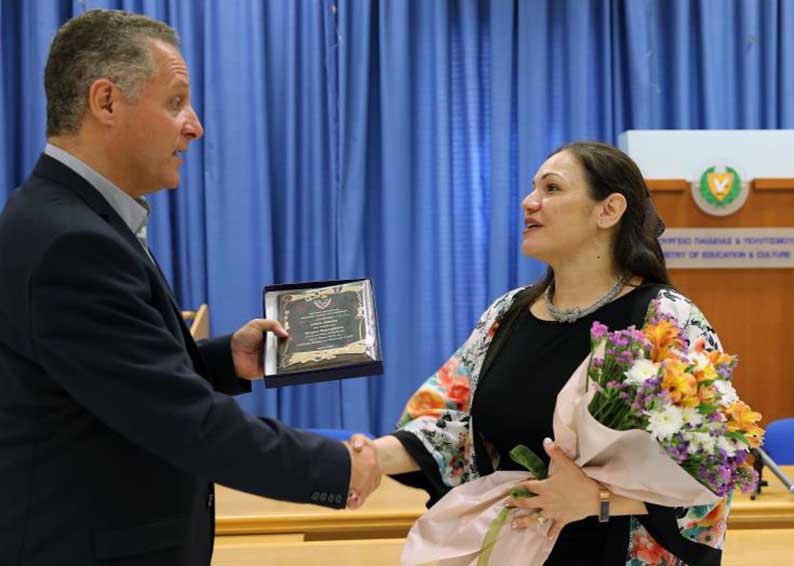 UK Cypriot teacher Andria Zafirakou who was voted the most outstanding teacher in the world this year was honoured at a special ceremony by Education Minister Costas Hambiaouris on Tuesday in Nicosia.

Zafirakou has won a million-dollar prize for being the most outstanding teacher in the world after having been chosen from 30,000 entries from 173 countries on March 18.

At the event, Hambiaouris said he was honoured to meet a teacher with “such a remarkable personality who is an excellent educator”.

“We are especially excited that you have accepted our invitation not only because you are a model, an example for all of us, but because I am convinced that we share the same vision for education,” he said.

Zafirakou stressed that in the difficult times “we live in and under the difficult economic conditions we are experiencing, what teachers do is extremely important in order to change lives”.

“I do not think I’m the best teacher or that a best teacher exists, I just think I’m very lucky to be honoured because what teachers do in all countries is extremely important,” she said.

This is her second visit to Cyprus, she added, saying she considers the island her second home.

The first time, she said, she visited the island as a student to see Lefkara embroidery. She has roots from Yalousa in the north from where her grandmother and grandfather came, but also from Famagusta, her mother’s birthplace. The Greek she speaks was taught to her by her parents and her grandmother.

“I want to thank all of my compatriots, who in their messages acknowledged the work that I did at my school in London which became known for my prize,” she said, and assured her audience that she is at the side of all the teachers in Cyprus and ready to offer her knowledge and experience to her colleagues.

Zafirakou, who was born in London to a Greek Cypriot mother and a Greek father, is an art and textile teacher at Alperton Community school in Brent, one of the poorest areas in the country.

The 39-year-old was named winner of the fourth annual Varkey Foundation Global Teacher award on March 18 at a glittering ceremony in Dubai.

As part of her efforts to make children and their parents feel included she learned basic greetings in many of the 35 languages spoken at the school.

She also visited students’ home and travelled on the bus with them to get to know them better, as well as redesigning the curriculum to make it more relevant to pupils.

“I was shocked. I was completely overwhelmed. I didn’t realise it was me,” she told reporters after the award ceremony.

Asked what she would do with the prize money, she said: “I’m going to be patient, I’m going to reflect, but as you know I think it would be really fantastic if I could think about how the arts could be celebrated even further within our school community.”

The terms of the award specify that Zafirakou will be required to keep working as a teacher for at least five years, during which she will receive the money in installments.

She will also be asked to serve as global ambassador for the Varkey Foundation.

Woman in north remanded for stabbing her son aged 7, to death